Start a Wiki
Andō Jurai, also known as July Andou in English variation, is the main protagonist of Inō Battle wa Nichijō-kei no Naka de. He is a patient of chūnibyō[6] that is part of the Literature Club at Senkō Private High School. His ability called "Dark and Dark", allows him to manipulate a dark flame from his right hand, although it's useless most of the time. He gains an evolved version of his Dark and Dark, called "Dark and Dark of the End".

Andō is an eccentric tall young man. He has unruly black hair and his eye color is teal (blue-green). His usual clothing is his school uniform, red coat, white shirt, blue tie, white pants and light brown shoes. He sometimes pulls up the sleeve of his clothing on his right arm to the elbow whenever he uses his ability. 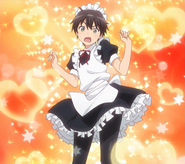 Andō in casual outfit.
Add a photo to this gallery

Andō is a edgy, energetic boy, with a bad case of chūnibyō or NPD[7]. Despite this, he is actually fairly good at academics, and gets decent marks in his classes. Still, Andō is not very observant, and is completely oblivious to some of the feelings the female members of the club have for him.

Later on, it is revealed that he was inspired to continue his delusional lifestyle in middle school by a certain silver-haired girl with glasses, which was later revealed to be Tomoyo.

Because of this, he has developed a very carefree personality that can often accept other peoples faults without much trouble. When he gained his superpower, he was excited, saying and even though it didn't do much, he still loved it all the same, because every guy wants one. Though, he does get depressed when others point out how useless his power is.

Andō also seems to be oblivious and dim to romance, due to the implied romantic feelings that Kushikawa Hatoko and Kanzaki Tomoyo have towards him in the series.

Also, Andō is caring, kind and generally understanding of situations, making the girls in the club being attracted to him, even Mirei and Madoka, and he always tries to pep up his friends, whenever they are sad.

Andō's right hand has a special power, which is a black blaze that is "darkness" itself. It is not actually hot (described as lukewarm), not able to burn anything and is not very reliable.[8]

This is the secondary stage of Dark and Dark.[9] This version of his superpower, which is hot unlike the first stage (which was described as 'lukewarm'). This burns everything, including the user and it can't be put out by anything.[10] epic

Retrieved from "https://inoubattlewanichijoukeinonakade.fandom.com/wiki/Jurai_And%C5%8D?oldid=9896"
Community content is available under CC-BY-SA unless otherwise noted.